Eliminate the Cycle of Chronic Pain 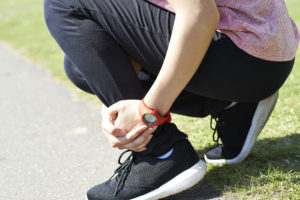 Traditional doctors define fibromyalgia as a “syndrome,” meaning patients suffer from a collection of symptoms and that all other diagnoses have been excluded. Fibromyalgia is a condition characterized by severe muscle pain, but to definitively diagnose someone with fibromyalgia they must have three or more of the following symptoms:

Traditional doctors focus their treatment on medications that alleviate some of the pain and anti-depressants to help with sleep, mood, and brain-fog.

Fibromyalgia is often caused by adrenal fatigue. The majority of patients with fibromyalgia suffered a major life trauma within a few years prior to their diagnosis. Life trauma can wear out the adrenals, preventing them from producing the amount of cortisol the body needs on a daily basis. Low cortisol levels cause higher inflammation and fatigue – two of the primary symptoms of fibromyalgia.

The body produces vitamin D when it’s exposed to the sun. Because it is made by the body, vitamin D is actually a hormone, not a vitamin (which we have to take in through our diets), and is a powerful modulator of the immune system. If you don’t have enough vitamin D you will have increased inflammation, which can then travel to different areas of the body, including those trigger points.

Environmental toxins include pesticides, insecticides, plastics, industrial agents and heavy metals, to name a few. Heavy metals shouldn’t be in our environment at high levels, but because we are industrialized, we are exposed to higher levels of these metals than the body was meant to handle. Billions of pounds of pesticides are used on our crops every year. Plastics are found in everything from the liners in canned foods to receipt tape. Environmental toxins in general not only increase inflammation but they affect the function of our endocrine organs, or organs that produce hormones, like the adrenals. In addition to increasing inflammation, environmental toxins have been shown to cause cancer, heart disease, obesity and diseases of the nervous system, just to name a few.

Food allergies affect at least eighty-five percent of the population. The most common food allergens include: WHEAT, MILK, SOY, PEANUTS, CORN, EGGS, and SHELLFISH. Chronically eating foods that you are allergic to increases overall inflammation, which can settle in tissues and joints.

Many people feel their symptoms more acutely as they pass through menopause and andropause because estrogen for women and testosterone for men are very powerful anti-inflammatories. Most patients with fibromyalgia have low DHEA and testosterone. Once they replace and balance low hormones with bioidentical hormones, they can support the immune system and reduce inflammation and pain.

Increased inflammation alters how the immune system functions. Many factors, including pesticides, insecticides, food allergens, and poor quality foods, contribute to our inability to stave off chronic infections such as yeast, Epstein-barr, and Lyme’s disease. When these pathogens establish themselves in the body, they lead to further inflammation and fatigue. You can help these issues by supporting the body nutritionally and improving your immune system function, but you need herbal antiviral/antibacterial/antifungal to rid the body of these organisms.

Fibromyalgia usually requires a multi-system approach – working on all of the above areas at once. All patients with fibromyalgia should have complete hormone testing, including four-point cortisol, sex-hormones, and thyroid hormones. Testing for vitamin D is essential, along with food allergy testing and screening for pathogens.

Patients must replace their electrolytes. Mix sea salt in water to taste, and then listen to the body and let it tell you how much electrolyte replacement it needs. A high-potency B vitamin complex, preferably with the active forms of the B vitamins, is important for both adrenals and liver support with detoxification. As no B complex has enough B12, patients need additional B12 of about 5000 mcg per day. Minerals, especially zinc, are important for adrenal function as well.

Dosing of vitamin D depends on blood levels, which should be 60-80 ng/mL for optimal function of the immune system.

Detoxification begins with properly functioning bowels. Good liver support is the next step. This includes the B vitamins and antioxidants such as Co Q10, vitamins C and E, and alpha lipoic acid. N-acetyl cysteine is the precursor to glutathione, the body’s most powerful antioxidant. Doses of 600mg twice a day can be very supportive in detoxification. Finally, alginates like chlorella can be used to pull out toxins, or more chemical compounds such as activated charcoal or EDTA.

Balancing hormones requires the foundation of good support for the adrenals and liver. Then we can replace hormones with bioidentical hormones, which are designed to be an exact replica of the molecule the body makes. This method avoids the side effects that are found with pharmaceutical hormones.

It is impossible to knock out pathogens without first supporting the body. Good adrenal support, adequate vitamin D, eating the right foods, etc. all lay the groundwork for the immune system to fight off pathogens. Once these supports are in place, patients can use a good herbal antiviral/antibiotic/antifungal, such as olive leaf, oil, or oregano, to finally rid the body of these unwanted infections.

OTHER SERVICES
This form needs Javascript to display, which your browser doesn't support. Sign up here instead